The most common question we hear at the end of a season is “Why did my players lose their stars?”

When you make it into the Top 7 of the League at the end of a season, you gain a manager level and enter the next league level. This means that the opponents in your next season are also of a higher level. Here is where some players get confused. You’ll notice that your players have less stars than they did before. However, if you place your mouse above the star, the number indicating the quality is the same as it was before.

So what’s the issue here? Well, stars are used to indicate your players’ quality comparedto the league level. They don’t lose any skills or stats, but in this new league, the standards are higher and the competition is tougher. It is basically just a visual indicator of how good your player is compared to other players on your level. Their actual quality is still the same. 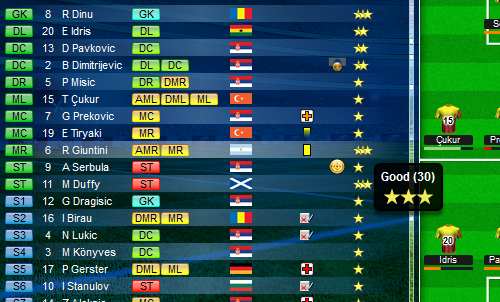 Another way to notice this is by checking out the teams of managers of a different level. If you take a look at a team a few levels below you, you’ll see that they all appear like 1-star players to you. When you check out a team of a higher level than you, you’ll notice that they have much more stars than you. But both of those managers see their own players as 3 or 4-stars, because their league difficulty is different to yours.

We hope this helps clear up one of the most common confusions in Top Eleven.

Discuss this article on the official Top Eleven 2015 forum.